Tonight, we were getting rapped up warm and heading over to the beautiful city of Dundee to the ice arena where The Dundee Stars ice hockey team were getting ready to face off against The Sheffield Steelers.

Unfortunately, Dundee Stars haven’t been doing very well this season, so we had no idea what to expect from the game, maybe another big loss but hopefully a big performance from the team. Within the ice arena, there is a bar, a coffee shop and a cafe along with vending machines all of which are reasonably priced! Matthew and Liberty always love getting a slush and a hotdog and it doesn’t cost the bank! 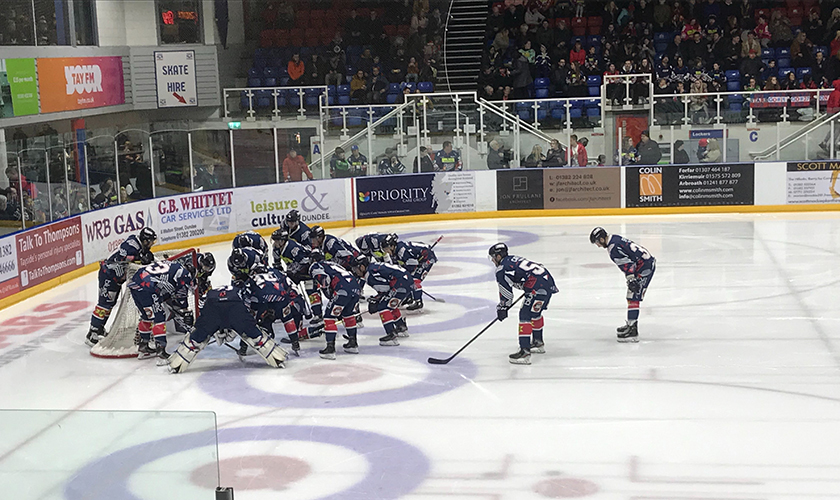 As both teams entered the ice you could already see the heat between them almost melting the ice! This was going to be fast paced and full on from the start! We were not disappointed! The players from Dundee Stars came out all guns blazing wanting to win match.

After 3 hectic periods of play, with both teams giving it their all, the score was tied! We were facing extra time! Liberty had called penalties before the game had started and that’s exactly where it was heading! After 5 minutes of extra time 4 on 4 we were on to the excitement of penalties.

Everyone was cheering for the Dundee Stars to win, they deserved it after the performance they had put in! After 5 penalty shots each, Dundee won! The crowd were going wild! After the game there was a 90’s night being held with a disco and Matthew and Liberty got to meet some of the players which they really enjoyed!

Overall I would highly recommend the ice hockey for a family day out. It’s so quick and fast paced that any member of the family will have something to enjoy!